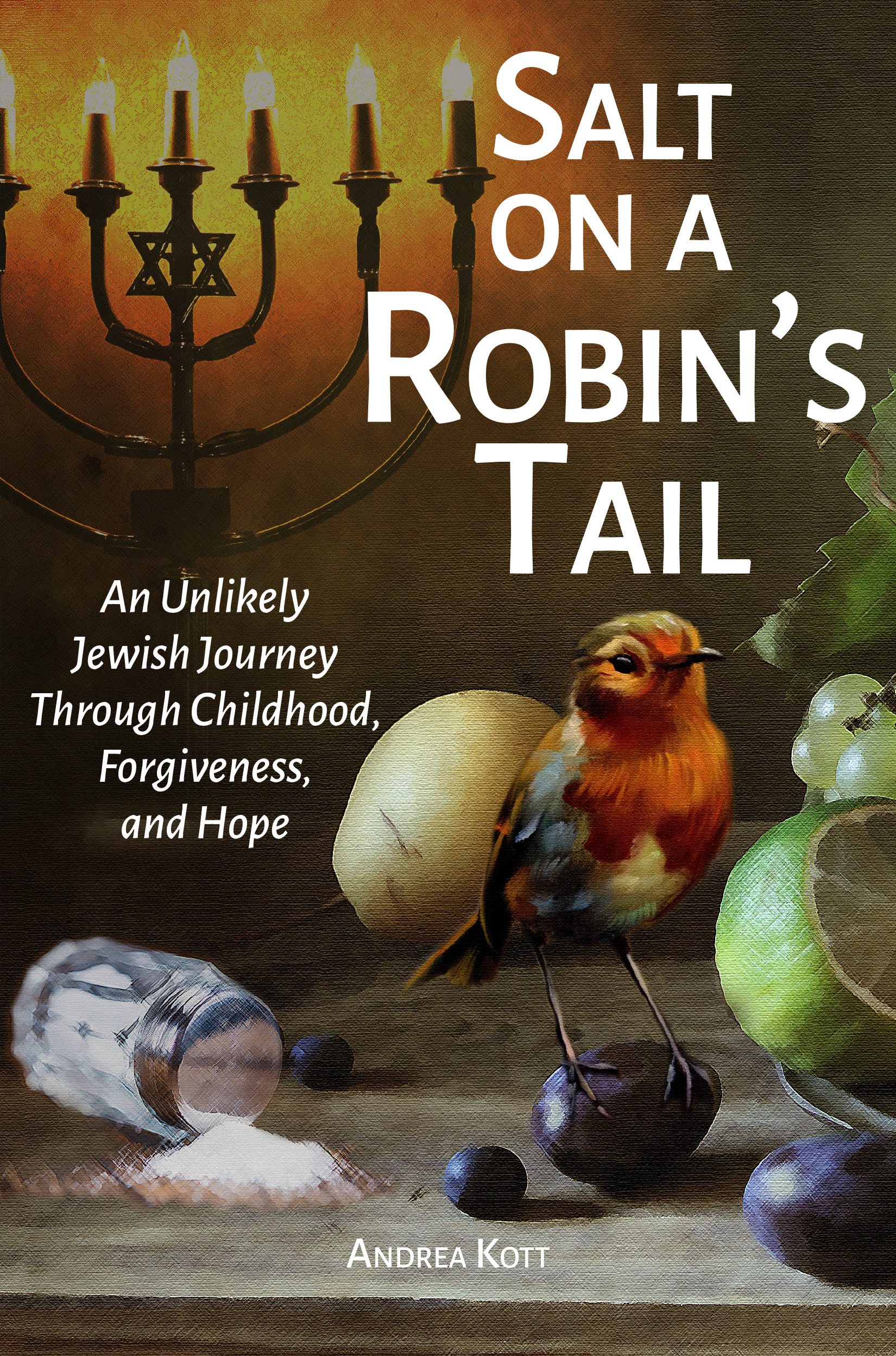 Salt on a Robin’s Tail: An Unlikely Jewish Journey Through Childhood, Forgiveness, and Hope

Andrea Kott thought of herself as “the welfare Jew.”

The daughter of a single mother whose depression and drinking pitched them into poverty, her stormy life looked nothing like that of the Jewish kids she knew: It defied every stereotype she associated with being Jewish—having an intact family and material wealth, and becoming a bat mitzvah.

Alienated and ashamed, Kott felt ineligible to be Jewish, yet hungered for connection to the tradition and to God. It took a near-fatal accident, her mother’s death, marriage and motherhood, and losing a beloved brother for her to find her Jewish home.

Salt on a Robin’s Tail: An Unlikely Jewish Journey Through Childhood, Forgiveness, and Hope is a true story of love and loss, struggle and survival, despair and possibility. It shatters stereotypes and inspires reconciliation with the painful past.

Andrea Kott earned her bachelor’s degree from the University of California–Berkeley and her master’s degree from Columbia University’s Mailman School of Public Health. In addition to publishing work in The New York Times, Lilith Magazine, JAMA, and literary journals, she writes about public health for global and national nonprofits, public health schools, and academic medical centers. She also teaches English as a Second Language to immigrants and refugees, and participates in Hevra Torah Study at Woodlands Community Temple. She and husband Erik have two grown children, Sophie and Ben, and live in Sleepy Hollow, New York.

“It won’t be long,” the nurse said, closing the blinds against the morning sun.

My mother’s chest was rising and falling in widening intervals. Her skin was ruddy, her hair matted around her face. She smelled like baby powder.

I had raced in a cab from Manhattan to La Guardia Airport to catch a flight to Florida the day before, minutes after my mother’s sister had called from the hospital in Miami. “Get here,” was all Aunt Lila said on that early August morning in 1992. Mom had just received the first of two experimental chemotherapy treatments. She was comatose by the time I arrived. I slept in a chair by her bed and awoke the next morning, surprised to find her still breathing. I caressed her arm and kissed her forehead. Then I left.

“I’ve got to get back to New York,” I told Lila in the hospital lobby, expecting her to urge me to stay.

Mom died the next day. I’d tried to forgive her but I hadn’t gotten far enough. If I had, I wouldn’t have left her side.

It would take years for me to forgive my mother for being the parent she had been: depressed, alcoholic, abusive, absent. It would take many more for me to reconcile the angst from having grown up in a home where financial hardship and worry were constant; dislocation was frequent; and emotionally violent eruptions, routine; a home whose brokenness was humiliating enough without us also being Jewish. My stormy life looked nothing like the lives of the kids I grew up with and defied every stereotypical notion I’d had of what being Jewish meant, flooding me with shame and alienating me from my own tradition.

Yes, we were Jewish. And yet, we weren’t. There was no mezuzah inside our doorframes or kosher dishes in our kitchen. We served milk with meat, ate deep-fried scallops on Friday nights and bacon on Sunday mornings. During my early childhood, Mom cooked lavishly for the High Holidays. But I didn’t get to skip school, and we didn’t go to synagogue. I’d never even been inside a synagogue. On the first night of Passover, we attended a Seder, while I ate Wonder Bread French toast throughout the week. During Chanukah we lit the menorah, one candle each night, until all were ablaze—a dramatic and beautiful symbol whose meaning I did not understand. The one Chanukah gift that Mom managed to afford—a Chatty Cathy doll—awaited me on Christmas morning, beneath the “tree” that my brother Steven made from rolled-up pages of The New York Times.

The contradiction didn’t bother me: the menorah and the newspaper tree. I saw no problem celebrating both holidays, although given a choice, I would have celebrated Christmas. It felt so much more festive than Chanukah. It filled the air with the smell of fresh pine wreaths and trees. It brought twinkling lights and other decorations to stores and streets, and holiday specials to television. It brewed a swelling anticipation that was impossible not to absorb. Even though I was Jewish, I believed that Santa Claus kept his eye on me all year long to see whether I’d been “naughty or nice” and deserving of presents. I loved knowing that he was watching over me. I loved having something to believe in.

My mother wasn’t exactly thrilled about my ardor for Christmas. But that didn’t stop her from bringing me to see Santa at Alexander’s department store, or letting me have a fake tree. It must have seemed like a harmless compromise: a way to stop my nudging, and a surefire recipe for my happiness, however temporary. But I wanted more. I wanted a real tree—I wanted to celebrate Christmas.

“Can we hang lights outside, then?”

“Everyone has Christmas lights.”

“Maybe no one knows we’re Jewish.”

“Everyone on our block knows who’s Jewish.”

“How does everyone know?”

“Are all the houses without Christmas lights Jewish houses? Is that why people know we’re Jewish?”

Mom wouldn’t answer. I took a quick inventory of our Queens neighborhood. “The Steins are Jewish. Their house is always dark. The Golds’, the Rosensteins’, and the Weisses’ houses are dark. Mrs. Schwartz across the street is Jewish. Her house is dark, too. If we put up Christmas lights, then people won’t have to know we’re Jewish!”

The logic made perfect sense to me: Christmas decorations of any kind seemed like the perfect cover, like a wig on a balding head. If our house had them, I reasoned, then people would figure we belonged to some denomination of Christianity. And if they figured that, then they wouldn’t sneer at us— and we wouldn’t have to apologize—for having Christmas decorations. My argument didn’t persuade Mom, or perhaps she had simply stopped listening. Either way, she would not relent. I wasn’t getting a real Christmas tree, which seemed ridiculous and unfair.

It was also confusing. I was allowed to dip one toe into Christmas but couldn’t publicly embrace the holiday because the tradition wasn’t ours. Yet, we didn’t embrace our own tradition with any kind of enthusiasm.

When the few Jewish holidays that we recognized ended, when the last yahrzeit flame died and the menorah resumed its place behind the gravy boat in the kitchen cabinet, we weren’t Jewish anymore. My five-year-old brain couldn’t understand why we had to pay attention to being Jewish in the first place. But I ignored the inconsistencies and counted my blessings. I’d gotten a Chatty Cathy doll, after all.

It would be years before I understood that those inconsistencies mirrored my mother’s own ambivalence toward Judaism and that her ambivalence, and ultimately her complete disengagement from the tradition, had evolved from a lifetime of disappointment and grief. It wasn’t until I reached young adulthood that I began to see how her years of inner turmoil, and her attempts to deaden it, had short-circuited her faith, and how her alienation from Judaism became mine.