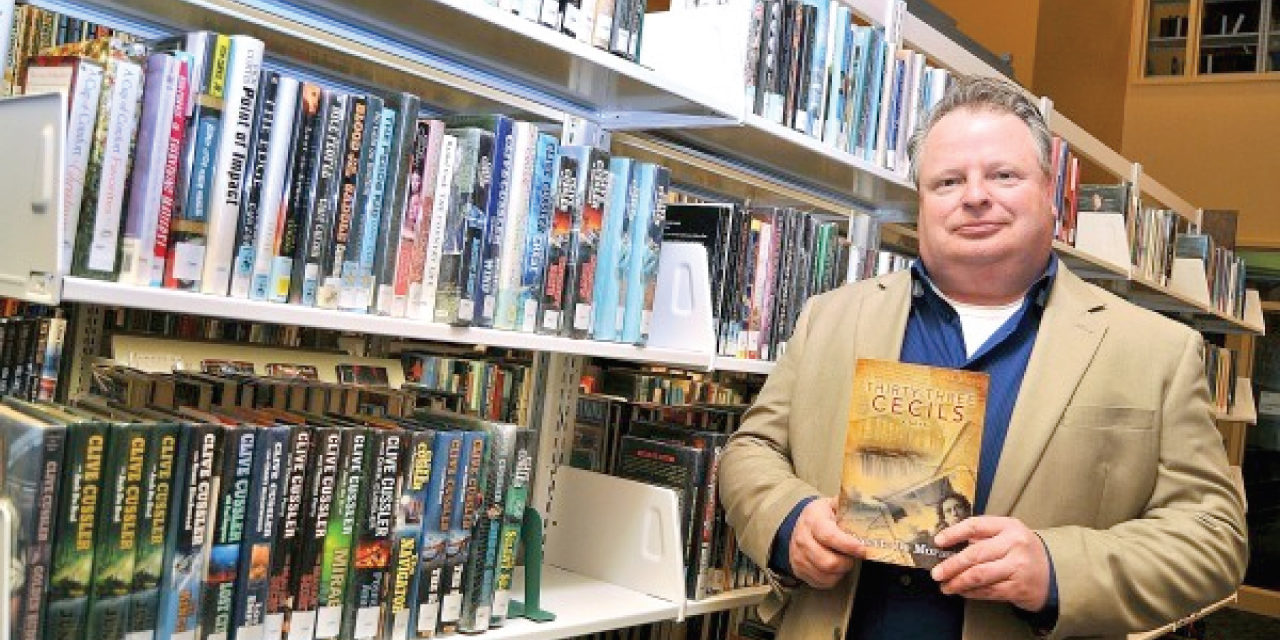 Dover author Everett De Morier holds a copy of his book “Thirty-Three Cecils” while standing in the fiction section of the Dover Public Library Tuesday afternoon. The book is available at amazon.com. (Delaware State News photo by Dave Chambers)

DOVER –– After a decade of writing and editing, “Thirty-Three Cecils,” the third published book of local author Everett De Morier, is finally available.

“It’s a story that takes place in 1992 and is really about two very different characters and shows what happens when people try to change the unchangeable,” he said.

“I was never sure of its value because when you work on something for so long, it’s hard to go back and read it and tell if it’s any good,” he said. “But there was an open submission at Blydyn Square Books so I decided to give it a try.”

In the end, Mr. De Morier’s novel was chosen as one of the first three books to be published by the new company.
Blydyn Square Books, a Landsdale, Pennsylvania-based company was still under construction during Mr. De Morier’s book’s publishing period, making it a different experience than his two previously published nonfiction works.

“With my other two books, I was a small fish in a small pond, but this time around I’m still a small fish but in a Dixie cup,” he said.

Even though Blydyn is a new small business, Mr. De Morier, a native of upstate New York who moved to Dover in 2007, said is very pleased with the final product the company produced.

“They took the time to edit the book to make it a better book, but my two other books, I was so desperate to get them published, I wasn’t necessarily concerned with them being edited into a better product,” he said.

Mr. De Morier said books usually take about one year to get through publishing to press but “Thirty-Three Cecils” took about two or three since Blydyn was just getting off the ground.

“It’s been a longer process than usual but I think everything turned out for the best and I’ve formed a good relationship with them,” he said.

Aside from published works, Mr. De Morier has been involved in various writing projects like a web magazine, 543skills.com, which he manages and updates about twice a week, and plays, having written six for his church, Cornerstone Baptist in Dover.

“I got called and asked to work on an original Christmas play and agreed. Most Christmas dramas are horrible so I wanted to make something better,” he said.

“They always end with everyone happy and everybody’s problems solved, but that’s not how things are. Even though

I hadn’t done it before, I knew I could write one that was new and different.”

He succeeded in that endeavor, producing a play called, “Dover: A Christmas Story,” and has followed it up with another five original plays at Cornerstone.

Aside from the plays and web magazine, Mr. De Morier also has written countless short stories over the years.

“There are so many, just boxes of them,” he said. “I don’t even know when I first started, it’s always just been something I’ve enjoyed doing.”

When it comes to writing fiction, whether is be a short story or novel, Mr. De Morier likes to use aspects from his real life, and let them go.

“The first step of it for me is just getting everything down on paper and just going from there,” he said. “After I have the initial idea, I just let it go.”

He also said that when initially getting fiction underway that he isn’t afraid for things to be messy.

“For me, the only way to write well is to write badly first,” he said. “I need to get the first scene or chapter down because everything hangs on it, but after that, I write freely until I go back to edit and revise everything, because that’s when you have the chance to clean everything up.”

Although Mr. De Morier has written in so many capacities over the years, it remains a hobby while he works full-time as an engineer at VSP Technologies.

“Thirty-Three Cecils” is available online at amazon.com and blydynsquarebooks.comand will hit store shelves this summer.

Blydyn plans to nominate it for several book awards.

“I’m anxious to see what people think of it, but I know I’m pleased with the way it came out so I hope others feel that way too,” he said.