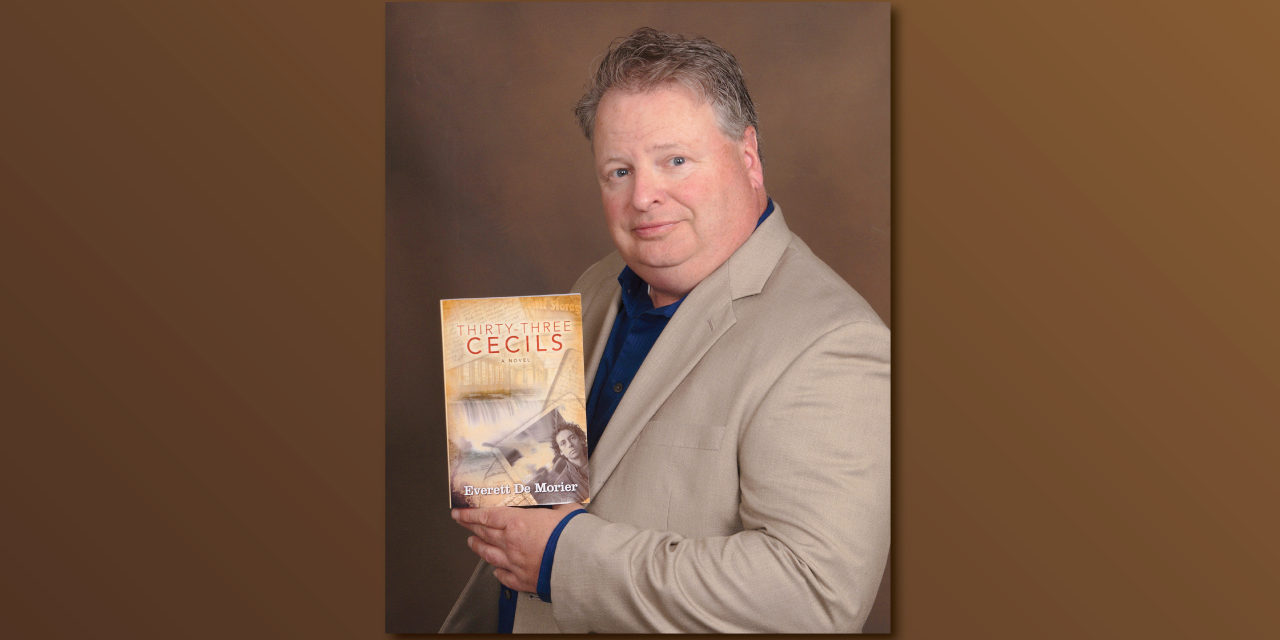 Because the city’s attracts visitors from around the world, De Morier’s hero visits the falls and feels as if he’s traveled the world.

The author, originally from a small town near Binghamton, now living in Dover, Delaware, recently shared a few thoughts about his book, published by Blydyn Square Books, and provided an excerpt for Sunday Lifestyles.

QUESTION: What can you tell me about the plot of your book?

ANSWER: There’s two different stories going on in parallel. One guy lives in Binghamton and he decides to go see the world.  So the first place he goes to is Niagara Falls.  When he moves on from there he connects to the other story.

Q: What is the other story?

A: The other story is about a divorced man in Erie, Pa. He’s been to prison and trying to be a father to his two young daughters. It’s totally different from the story of the guy in Binghamton who is an alcoholic who realizes the world isn’t as dark as he once thought. He’s starting to think ‘I messed up but it’s not too late.’  That’s when he goes to Niagara Falls.”

Q: What happens to him in Niagara Falls?

A: The one thing that amazes him is that he stays at a little place and he’s the only American there. It’s almost like he’s gone much farther than the four hours he traveled. He feels like a world traveler.

Q: So, this is an optimistic story?

A: Yeah, it’s kind of a trick. In the very beginning you know what happens to these characters. But, when the story ends, it is a very optimistic story.

I think maybe that’s the thing about vacations. It’s not the place you go. It’s kind of the way you see things. Like you can take your heavy pack off and finally walk around and stretch out your legs and see everything.

A bird at home is just a bird, or probably you don’t even see the bird — it’s screaming at you but you’re late or you’re pissed off or you’re worried, and that bird don’t even exist to you. But on vacation, a bird is magical — it’s like a lion or a rhino and you see the colors and hear the sounds of it.

I hope I never lose this feeling. I hope all the time I’m traveling, every day is like this day.

I followed the flow of people and cars down toward the Falls. I didn’t know exactly where the Falls was, but I knew it was close because everything was traveling that way, so that’s the way I went. I passed little shops and stores and the trees near the roads that have wrought-iron fences around their trunks (I wonder why — so they don’t get hit by cars?).

I passed a store that had a sign that said they sold bus passes. Randy and me had talked about this so I went inside. They had two kinds of bus passes — one was the touristy kind that took you to seven or eight places and the other was the city bus pass that went all through Niagara Falls and Buffalo. I bought four postcards and a week’s city bus and rail pass. That way, I can go out and find work tomorrow and get anywhere in Niagara Falls or Buffalo for the whole week I’m here. I held the bus pass and read both sides of it. When’s the last time you read both sides of something (ha)? But it’s like the puddle thing—it’s magical if you let it be. And I read the bus schedule and looked at all the places I can go now. Places I never heard of like Lafayette Square, Eagle Canal Harbor, and Fountain Plaza. These places are as exotic to me as Marrakesh or Singapore and I’m only four hours from home (well, eight hours if you go by Greyhound bus, ha).

I was moving down with the crowd and I heard the Falls before I saw them, like a far-off engine. Along with the flow of people, I floated toward the sound. It was raining just hard enough to be under an umbrella and just enough where you’d get wet if you didn’t have one but I decided I could go without my bubble and I put the umbrella down. And there it was: Niagara Falls.

Even in the rain, people were there looking at the Falls. Watching the giant horseshoe ribbon of water that pounded to the rocks below. I was wondering what the very first people that saw this thought, just walking along and hearing the rush of water, then following it until they saw this. What did those first people that found the Falls think? And I thought how deep and original it was to wonder this until I heard two other people ask each other the very same question about three minutes later (ha).

I stood there and just watched and listened to the Falls, the great Niagara Falls. I moved to different places to see it from different angles. I watched the other people watching it and then watched it myself and I couldn’t tell if the spray I was feeling was from the Falls or from the rain but it didn’t matter.

The Falls are like the youth hostel and I was among the few Americans there. There were people with turbans and some wearing bright yellow and green soccer shirts and T-shirts with logos written in different languages. I liked leaning against the rail and looking at the Falls and letting all them languages splash up on me like the rain.

There were two rainbows at the base of the Falls and they just sat there, no matter where I moved.

I saw people trying to take pictures with the Falls in the background and I offered to take their picture and they smiled and thanked me either in English or in their language and I walked around looking for other people to take pictures of.

But the really cool part is not the Falls; it’s upstream from it. When you walk up from the Falls, there’s this bridge-type thingee and you can see the water as it’s getting ready to become the Falls. That’s the amazing part. That’s the part that’s completely effing wild.

You’re watching this dark, thick field of wet power and it don’t turn off and it don’t slow down. It just moves to the edge to die. It runs to become spray and mist and it can’t wait to get there.