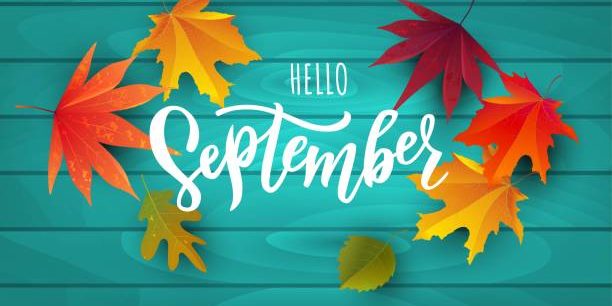 The Five Most Common Errors We See in Manuscripts

Aspiring writers often ask me what the most frequent errors are that I see in manuscripts people submit for publication. The truth is, we see SO many mistakes that it’s hard to pick just five, but I’ll give you the ones that annoy me the most (which also happen to be among the ones that will make me stop reading instantly if I spot them while I’m reviewing your submission!).

The difference between your/you’re, their/there/they’re, and it’s/its is something I remember learning (and committing to memory) somewhere around, oh, first grade, I think it was. The fact that so many adults don’t seem to grasp that these words are NOT interchangeable boggles my mind and makes me weep for the state of our public school system. It’s one thing if you’re just a normal person, but if you’re hoping to be a published WRITER, you need to learn how to use these words correctly! 😊

I’m not sure why exactly y’all seem to feature so many heavy drinkers in your manuscripts, but you do—really, really a lot! I’m kind of amazed this tip makes it into the top five, but I took a quick scan through the past year’s submissions and, believe me, this error came up more than I ever could have guessed. What’s even sadder than the number of alcoholics in writers’ prose is that so few writers know how to tell us that someone’s been drinking. Lines like “He had drank lots of beer that night” appear all too frequently. For anyone who missed that lesson, it’s supposed to be “He HAD DRUNK lots of beer that night.” Try to remember that the next time your character goes on a bender! 😊

This one is a big pet peeve of mine, something that always makes me think the writer is NOT an avid reader. (And, as I always say, if you don’t read a ton, you have no business attempting to write anything more involved than a grocery list.) Too many writers don’t seem to know when to use capital versus lowercase letters. For example, they’ll write, “I asked my Mom for lunch money,” but then they’ll also say, “I talked to mom about school.” That’s just a mess. Here’s the easy rule to remember: You never cap someone’s position or title (in the former example, “mom”) when you use it with a modifying word like my, but you DO cap a position or title when it’s being used as someone’s name, as in the second example. Pretty simple, right?

Again, this is just a personal preference, but in my experience, only the laziest writers eschew the Oxford comma. I mean, how hard is it? Why would you resist adding that tiny dot with a tail to your sentence when you know it could mean the difference between getting your point across and being humiliated because of your confusing text? Think that can’t happen? Guess again. (See the pic below if you don’t believe me.) Use the Oxford comma, people. It makes us think you give enough of a crap about your work to bother hitting the comma key on your keyboard. 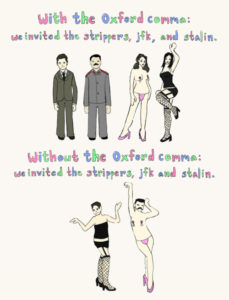 Call me crazy, but when you’re trying to impress a publisher with your prose, step one ought to be making sure you follow all their submission guidelines. And first on THAT list, I would think, should be spelling the publisher’s name correctly. The thing that always gets me, here at Blydyn Square, is that we don’t require cover letters or synopses or any of the other nonsense many other publishers demand—which means you don’t have any real reason to even USE our name in your submission, and yet, at least half of the writers who send us their work DO name us . . . and at least half of those writers spell our name wrong. If you can’t tell the difference between “Blydyn” and “Blyden,” we can tell we won’t want to work with you.

So, that’s my list of the top five annoying mistakes I see in submissions. Sure, there are plenty of others, but these are some of the ones I see the most, so consider this a public service announcement, helping you avoid them when you submit to us (and to other publishers or agents) in the future. Hope that helps! 😊 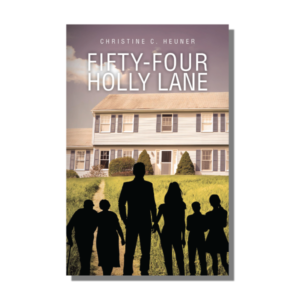 Don’t forget to join us for our next book club meeting, on October 13 at 6:00 p.m. ET, we’ll be talking about Christine C. Heuner’s novel Fifty-four Holly Lane. It’s the story of a couple from the “Sandwich Generation,” living in a crowded home with both their two teenage kids and the husband’s elderly parents. The author will be joining us for our chat, so don’t miss this very special meeting! 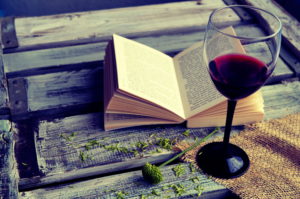 “What I love most about reading: It gives you the ability to reach higher ground. And keep climbing.”

Congratulations to Najee Chua, who won an Amazon gift card. The question was:

In August 79 C.E., what volcano erupted, destroying the city of Pompeii?

Which famous English author failed to mention the month of September in any of his plays?

Send us your answer (info@blydynsquarebooks.com) and you’ll be entered into our prize drawing.