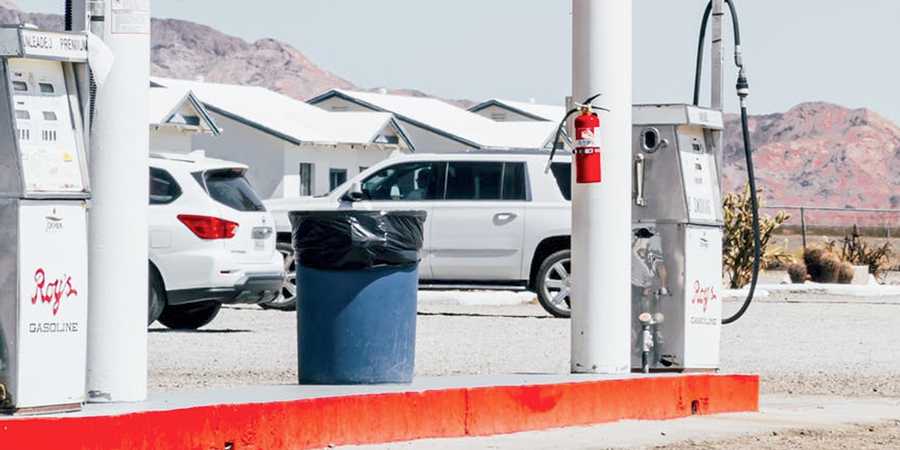 I was walking my dog Rosco one morning recently, on our usual route, past the gas station, when he stopped dead and refused to step over a particular patch of sidewalk.

I couldn’t blame him. The owner of the gas station had let his blackberry bush grow into a veritable tree, which is now raining overripe fruit down onto the sidewalk, resulting in a thick, slippery, purple sludge.

I had to drag Rosco through the blackberries and over to the clean sidewalk beyond. (Now, before you report me for animal cruelty, please note: I considered carrying him over the messy section, but I was afraid I’d slip and fall, injuring both of us. Giving him a little tug seemed like the kinder option.)

I was about to rant to Rosco about the blackberry bush owner’s laziness in failing to clean the sidewalk (or trim the bush in the first place!) when, not three feet beyond the blackberry pile, I stumbled over a half-eaten ham sandwich—bread, mayo, and all, just lying there on the sidewalk.

All I could think was: What is this world coming to? How inconsiderate have people become that they can neither take care of their landscaping nor throw out a sandwich in the trash can (located less than 10 feet away)?

How lazy has our society become?

As Rosco and I continued our morning walk, the more I fumed—and the more I thought about the situation. And then I realized something:

All of civilization’s ills (more or less) come from human laziness.

Sure, there are illnesses out there that we can’t control (as there are exceptions to every rule), but the vast majority of disease is linked to poor diet, lack of exercise, and, in short, to being too lazy to take care of ourselves properly.

Racism? At heart, it’s the result of being too lazy to get to know the other guy before rushing to judgment.

Even war really boils down to the simple fact that people choose not to bother to make the effort to talk things out before resorting to force of arms.

Why are people so lazy?

I’m asking out of genuine curiosity here, because I may have a lot of negative traits, but laziness is NOT one of them.

My typical day (weekdays, weekends, and holidays—it makes no difference to me) begins around 4:15 a.m., when I get myself ready and go for (at least) a 5-mile run, before coming home to grab Rosco and head back out for a 2- to 3-mile walk.

Basically, before 6:00 a.m. on any given day (before anyone I know is even thinking about getting out of BED), I’ve already traveled around 8 miles. On foot.

After breakfast and a shower and dealing with email and business-related social media posts, I drink some green tea while I take an hour to myself (I’ve earned it) to write, study my languages, and ease into the regular workday, which begins no later than 8:00 a.m. (about the time most people I know are finally easing themselves out of bed).

With only about a 15-minute break for lunch (and perhaps another short walk for Rosco), I work straight through until it’s time to cook dinner, starting around 4:00 p.m. (I’m not a TV dinner or takeout kind of gal—the meals are cooked from scratch, all the way, in my house.)

After dinner, it’s another walk for Rosco and then back to work for a few hours, before finally settling down to read for a while before bed.

Basically, I never stop working (or moving, if I’m not technically working on a paid project).

It may not be an exciting life, but it makes me happy, and I’m by far the most productive person I’ve ever met. No, I am not lazy.

It would never occur to me to hurl my half-eaten sandwich onto a public sidewalk or allow my blackberries to cause a walking hazard.

It would also never occur to me to NOT pick up after my dog, though I seem to be the only person in my town who knows why stores sell those plastic poop bags. . . .

I ask again: What is it that makes most people so lazy?

And how can we make them stop?

If we could get just a handful of people to start following a schedule a little more like mine (and a little less reliant on the smartphone and the snooze alarm), the world would be a much better place. Trust me: When you’re as busy as I am, you simply don’t have TIME to wage war or engage in racist behavior.

So, join with me. Let’s (to bastardize Neville Chamberlain’s famous “peace in our time” quote just a smidge) “end laziness in our time.”

It’s easy. The first step is getting off our butts.