My, How Things Change (Or, My Thanks to the Onion Rings) 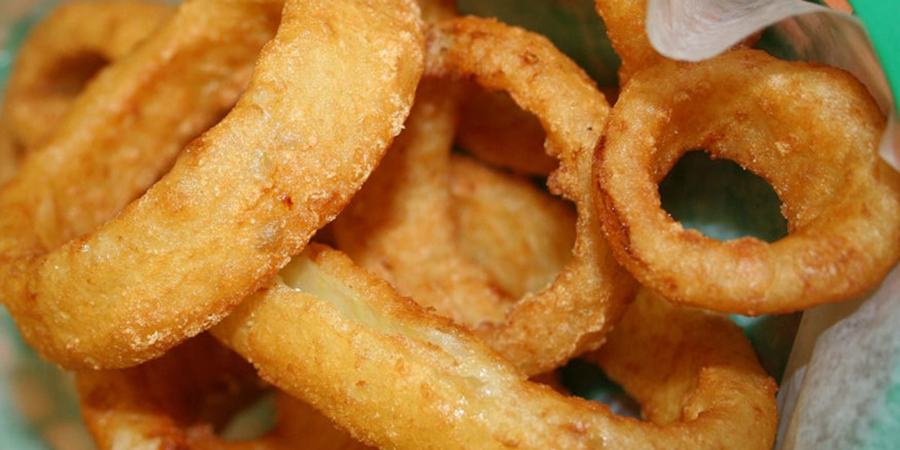 About ten years ago, my diet consisted mostly of deep-fried mozzarella sticks and fettucine alfredo.

The mozzarella sticks were by far my favorite food, and I was a true connoisseur. I ordered them at every restaurant and had an elaborate rating system I used to keep track of which place had the best ones.

Other than the occasional cream puff (which I could eat by the 92-pack in a single sitting), I wasn’t a big sweets eater. I often suggested ordering another round of mozzarella sticks in lieu of dessert with our coffee and after-dinner drink.

Basically, if something came out of the deep-fryer, it was on the menu.

Needless to say, I was overweight, lethargic, and miserable.

That changed dramatically after I got divorced from my fellow fried-foods addict of a husband and started cooking for myself and learning more about healthier options. Forty-some pounds and several years later, I now lead a very different life.

I eat out less, I cook all the time, and I mainly find myself craving healthy foods, like raw veggies dipped in hummus, instead of the deep-fried appetizer sampler at the local chain restaurant.

The bad news, I discovered recently, is that my body has changed along with my attitude. Though I’m a firm believer in letting yourself indulge in the occasional cream puff or order of mozzarella sticks, I do so only rarely—and my body, I’ve learned, isn’t thrilled when I do.

This past week, for example, I had a nice lunch out with my mom. We enjoyed some wine, split an appetizer of fried green beans, had a (not so great) key lime pie for dessert, and shared some very greasy onion rings.

That last item, I believe, was the culprit.

It’s been a long time since I had an onion ring—the non-frozen kind, the kind still dripping with oil straight from the fryer. I admit, it tasted AMAZING going in. But within a few hours, I was feeling anything but.

By dinnertime, my stomach was churning, I couldn’t stop belching (and trust me, those onion rings were NOT as tasty the second time around), and I had a headache that felt like someone was tightening a steel band around my forehead.

To give you an idea of just how bad I felt, I did NOT eat dinner. Me? Skipping a meal? I assure you, it NEVER happens. This girl likes to EAT.

As I sat there that evening, mindlessly staring at Netflix because I felt too lousy to do anything else, I realized something: I had felt this way before.

Back when I was still married, when every Saturday’s lunch was the fried mozzarella and chicken finger platter at TGI Friday’s and every Sunday included chicken parmesan from Olive Garden, I had that feeling—headache, nausea, sour stomach—ALL THE TIME.

The thing is, back then, I had no idea that that feeling wasn’t normal. I thought it was just “how you felt” after a meal. It never occurred to me that food could make you feel better, not worse, that it could be fuel, not just entertainment.

My, how things have changed.

I’ve become accustomed to NOT feeling sick after eating. I’ve grown used to feeling just as energetic AFTER a big meal as BEFORE.

And, though they won’t be back on the menu for a long, LONG time, I’m grateful to those greasy onion rings for showing me just how far I’ve come.