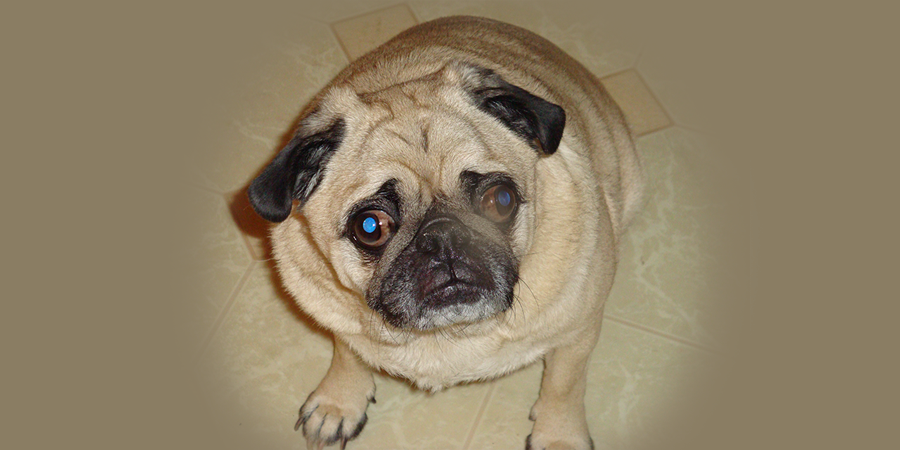 A year ago today, I had to say good-bye to my pug Caesar.

He was almost 15 and had been suffering from crippling arthritis for years (not to mention he’d gone both deaf and blind). It wasn’t like I didn’t know my time with him was running out.

But it still came as a shock that day, last year, when I came home and found that, even with his heavy-duty pain meds, he couldn’t even walk across the lawn. He just hurt too much.

I had already pushed it out of my mind how, that same morning, he had had trouble finding his way to the kitchen (his favorite room) to eat his breakfast (one of his three favorite meals—my boy could EAT!).

Or how, again that very same day, after wolfing down his food, he had become so disoriented trying to find his way back to his bed that he had stepped, full on, into his water bowl, soaking himself—and, judging from the look on his sweet wrinkly face, scaring himself a little bit, too.

Putting all those things together, I knew it was time for me to let him go. Keeping him around—confused, afraid, in constant pain—might have been a comfort for me, but not for him.

And he deserved whatever comfort I could give him, because he had been MY comfort—through marriage, jobs, divorce, success, and failure—for all the years of his life.

So, I did what was right for him, if not for me. And even now, a whole year later, I still feel a flash of alarm, of physical pain, every time I realize he’s not here anymore.

He’s not waiting at the top of the stairs for me to come and give him his dinner or to drag him outside for one of the walks he hated so much (even before he was in pain—he had never been much for exercise!).

Not having him here is a shock that doesn’t seem to be going away. Then again, I guess that shouldn’t be a surprise. Caesar was probably the closest thing I’ll ever have to the love of my life, and they say true love stories never end.